The Grade II listed boathouse at Thames Eyot in Twickenham sits on Historic England’s register of Heritage at Risk. Habitats & Heritage, with the support of Historic England, Pilgrim Trust and the Civic Pride Fund, is aiming to restore the boathouse to its former glory and give it a new lease of life as a community and education space.

The Grade II listed boathouse at Thames Eyot sits on Historic England’s register of Heritage at Risk. It was built in the 1870s by Frederick Chancellor as part of the remodelling of Poulett Lodge – one of four grand houses along the Thames at Twickenham – for William Henry Punchard, an eminent engineer.

The construction of the deep-water boathouse, with its balustrade and Italianate design, marks a point in time when the river became a source of enjoyment. Annual regattas and water carnivals grew in popularity, and pleasure craft from central London brought people to the area on daytrips. Those who were rich enough entertained their guests on private steam launches, which would have been stored in boathouses very similar to the one at Poulett Lodge.

The house was finally demolished in 1933 after a succession of owners and replaced with the Art Deco apartments known as Thames Eyot. Only the boathouse and the balustrade remain from Chancellor’s design – testament to the golden age of boating. 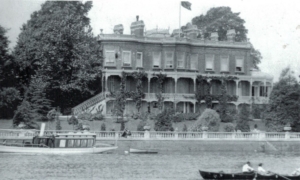 Habitats & Heritage, with the support of Historic England, Pilgrim Trust and the Civic Pride Fund, is aiming to restore the boathouse and remove it from the register of Heritage at Risk. We are currently completing a viability study to identify how the building can sustainably be restored.

If you have any questions on the project please contact Emily Lunn, Heritage Project Manager, on emily@habitatsandheritage.org.uk