Hidden away near the River Thames at Isleworth is a Victorian mausoleum built in 1854 to house the tomb of Priscilla Hoste, the beloved mistress of the 2nd Earl of Kilmorey, Francis Jack Needham. Find out more about this intriguing monument, it's hidden depths and how you can explore it for yourself.

The 2nd Earl of Kilmorey built this mausoleum in 1854 to house the tomb of Priscilla Hoste, his beloved mistress. It was originally erected on a plot that he had secured at Brompton Cemetery, but it was later moved twice so that he could keep Priscilla’s tomb near to where he was living.

Francis Jack Needham, known by some as ‘Black Jack’ due to his dark complexion, succeeded his father as the Second Earl of Kilmorey in 1832. At various times, he lived in five different houses in Twickenham, including Gordon House, St Margaret’s House and, further towards Hampton, at Orleans House, Cross Deep and Radnor House. 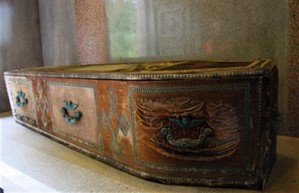 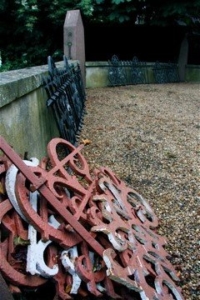 The Earl’s relationship with Priscilla developed from his friendship with her parents, Captain William Hoste and Lady Harriet Walpole. After Captain Hoste’s death, the Earl, who seems to have become guardian to Priscilla and her siblings, either eloped with or abducted her. This created a great scandal, especially since Priscilla was only 20 while the Earl was 36 years older, and already married. In 1844, their son, Charles, was born at Cross Deep House, by the Thames at Twickenham.

When Priscilla became ill in 1851 with a terminal heart condition, Kilmorey began preparing for her burial and in 1853 wrote to Brompton Cemetery regarding a select plot. It took over a year for the details to be settled and approved by the Home Secretary and cost Kilmorey £1,030 16s 9d. The architect, Mr. H.E. Kendall, designed the £30,000 mausoleum to fit the circular plot at Brompton Cemetery, which measured 1,963 square feet.

The shape of the building has similarities with the shrines at Egyptian Temples, the place where a treasured image of a god was installed. The Victorians were very interested in ancient Egypt. Egyptian imagery often featured in their graves and monuments, as can be seen in Brompton Cemetery. In fact, it contains another imposing mausoleum in the Egyptian style, that of Hannah Courtoy, who was also the mistress of an older man. By coincidence, this completed in 1854 as well.

When Priscilla died in October 1854, her coffin was inscribed with the words “the beloved of Francis Jack Earl of Kilmorey”. Inside the Mausoleum, the Earl installed a marble relief carved in Rome by Lawrence MacDonald (1799-1878) which showed Priscilla lying on her deathbed, with the Earl at her feet and her son Charles by her side. Her burial was a private matter and years later Priscilla’s whereabouts were still a secret as the Middlesex Chronicle had reported that the Mausoleum “contained the body of a dear friend”.

In 1862 when Kilmorey moved to Woburn Park (near Weybridge), he moved the Mausoleum with him at a cost of £700. Just six years later Kilmorey moved back to Gordon House by Richmond Lock, where Priscilla had died, moving the Mausoleum for the last time. Stories that a tunnel had been constructed to join Gordon House with the mausoleum were shown to be true after excavation work in 1966 revealed a tunnel under what is now Kilmorey Road, with sloping pathways at both ends. It is said that the Earl was in the habit of dressing in a shroud, lying down in his coffin, and having himself pushed on a trolley through the tunnel in preparation for his final journey to the mausoleum.

There may be more to the story than local legend. Joyce O’Rafferty was a librarian at Borough Road College in Isleworth from 1968 and often visited the library at Maria Grey College (the 2 colleges later joined to become the West London Institute of Higher Education). According to her daughter, Nuala Orton, who wrote to us in February 2020, one sunny afternoon in the late 1960s, some of the younger, more spirited Maria Grey library staff treated Joyce to a trip through the tunnel (the entrance to which was just outside the library) to the mausoleum. Joyce had to crouch down on a trolley because the roof of the tunnel was very low. She described the inside of the tunnel as being white with painted green trellis patterns. The trolley (also white) had ropes attached at both ends, so some of the staff popped round to the mausoleum and pulled her through, then the others pulled her back. Sadly there is no longer any evidence of the opening of the tunnel at the mausoleum, but what an experience it must have been!

The Earl passed away in 1880 at the age of 92. His body was placed next to Priscilla’s in his own coffin.

After Kilmorey’s death in June 1880, Gordon House was left in trust to his illegitimate son Charles Needham, until the time of his marriage. In 1895, Charles sold Gordon House for £10,000. In 1936, the grounds of the Mausoleum were passed on in perpetuity to Hounslow Borough Council on condition that access would be maintained, although it was not for some time that anyone entered this secret cemetery.

Since the boundary changes in 1994, the Mausoleum has become the responsibility of the London Borough of Richmond upon Thames. A number of initiatives have helped to clear the area in which the Mausoleum is situated.

August 2015 saw the completed restoration of the perimeter wall and railings of the mausoleum that has vastly improved aesthetic enjoyment of this unique space.

Since 2001 the Grade II* listed Mausoleum has been opened to the public for Open House weekend and other events such as our annual Plant Sale. 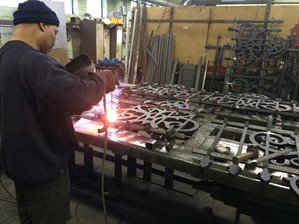 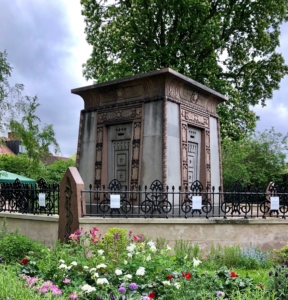