Nestled away amongst the trees on Richmond Hill is the Grove Gardens Chapel. Largely unknown to local people, this chapel has stood in Richmond Old Burial Ground since the 1870s and was designed by a celebrated 19th century ecclesiastical architect. 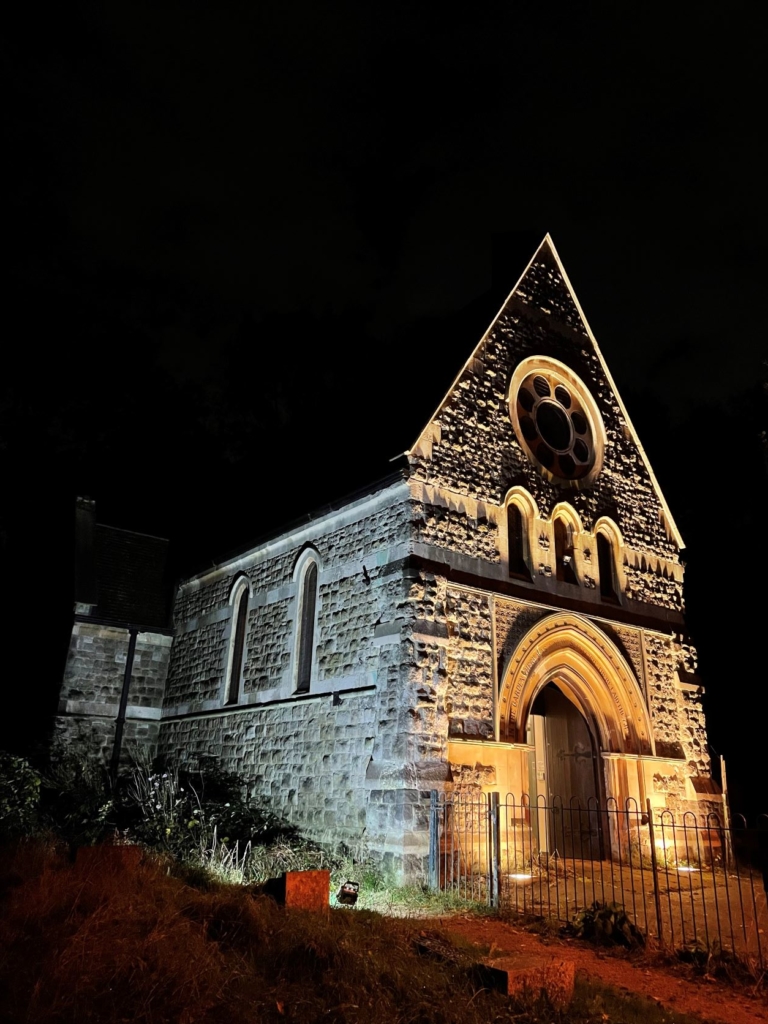 Built in the Gothic revival style, this chapel served as a Church of England mortuary chapel for Richmond Old Cemetery for nearly a century.

Inside, the chapel boasts a three-panelled mosaic mural in the Venetian style behind where the altar once stood. The two outer panels show the scene from the Annunciation with Gabriel on the left presenting lilies to Mary on the right.

The chapel has been disused since 1964 and was declared redundant in 1996. The Diocese of Southwark awarded a lease to the Environment Trust, now Habitats & Heritage, who completed the conservation work in the 1990s with support from English Heritage, the National Heritage Lottery Fund and local donations. The building was used as a children’s nursery until 2020.

The Chapel is now showing evidence of structural movement and Habitats & Heritage is working on plans to secure the structure of the building and its future use in the community.

Sir Arthur Blomfield (1829-1899) was an architect who specialised in ecclesiastical buildings mainly in the Gothic revival style. He was the fourth son of the Bishop of London and was subsequently born at Fulham Palace. He was educated at Rugby School and Trinity College, Cambridge. His work can be admired in many parts of the country and former British colonies including the Falkland Islands.

Aside from the Grove Gardens Chapel, he is also noted for designing the Queen’s School at Eton College, Church House in Dean’s Yard, Westminster, and the Cathedral Library at Hereford, along with buildings at many other schools and colleges, and various works for the Prince of Wales at Sandringham. His most important classical building was designed when he was architect to the Bank of England from 1883 and produced the Law Courts Branch in Fleet Street. He also designed St Barnabas Church in Oxford, in an Italian style.

In 1888 he was elected an associate of the Royal Academy, the following year he was knighted, and in 1891 was awarded the gold medal for the Royal Institute of British Architects for his distinguished works.  One of his early pupils was Thomas Hardy.

The chapel became disused in the 1964 and fell into disrepair over the successive decades. By the 1990s, nature had reclaimed the structure, covering it in ivy and allowing the elements to penetrate the interior through part of the missing roof. Habitats & Heritage’s predecessor the Environment Trust raised funds and restored the chapel to its former glory, making it once again accessible and a place for people to enjoy.

In recent years the chapel has again begun to fall into state of uncertainty, this time as a result of climate change. Severe subsidence has resulted in the transepts separating from the main building and for the back wall to tilt away. This movement has been attributed to the clay foundations expanding and contracting with the extreme wet and dry periods the country now experiences. The scale of the subsidence has led the building to become largely unused on safety grounds. Habitats & Heritage are now working to stabilise the structure with the intention to underpin the walls, securing the chapel into the future.