St Leonards Air Raid Shelter is a hidden heritage gem in Mortlake. It tells the story of the build-up to the start of the war - of the growing tensions across Europe that led to the demand to construct air raid precautions and life on the Home Front during the Blitz. Habitats & Heritage are involved in its conservation as an educational resource for schools and the community and are working towards the conservation of the building as testimony to the way in which people’s lives were affected by the threat of aerial attack in the Second World War.

St Leonards Air Raid Shelter is a hidden historic gem in Mortlake. It tells the story of the build-up to the start of the war – of the growing tensions across Europe that led to the demand to construct air raid precautions across the country – to the life on the Home Front during the Blitz.

Original plans, which are now housed in Richmond Library, indicate that the architect of St Leonard’s Court, Philip A W Roffey, submitted an application in October 1939 for permission to construct what are now known as the ‘day rooms’ of the air raid shelter, although it is likely that these would have been used day and night throughout bombing raids. The rooms were designed to hold 120 people and were built of reinforced concrete; indeed, the impression from the formwork is visible along the walls and ceiling. The plans correspond to the present day layout of the shelter, with benches running along the walls and a brick screen hiding two chemical toilets at the end of each room, along with an escape ladder.

A second set of plans, also submitted by Philip A W Roffey, but dating to September 1940, proposed an extension to the shelter to include the dormitory annex with 48 bunks. This new section was made from concrete, with a layer of tanking and a single brick skin. A hole was created in the original end wall of the corridor to connect the sleeping quarter with the existing structure. Possibly as a consequence of the lack of readily available resources and material at the end of 1940, the original day rooms are better quality and have not suffered from as much water ingress.

The plans for the extension also show proposed escape hatches that protrude above ground level and would have been covered with a layer of earth. A hinged louvered door allowed for ventilation.

While it is known that there are other shelters in the area (including Clapham South Shelter), none match the internal detailing, scale, or quality of finish. Peg numbers, in a uniform green that matches the original paint of the door and the shelves above the bunks, are still visible along the corridor. Each number was beautifully rendered in a stylised and highly evocative font. Lightbulbs dating to the war and homemade lampshades are still in situ in some of the bunks, along with the green painted wooden bed slats. Examples of lampshades include some made from strips of material and even one made from the original lightbulb box. There is a small letterbox for sending internal mail, and a stove at the end of the corridor. The original benches in the day room are still present, as are the four chemical toilets. 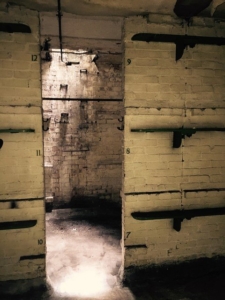 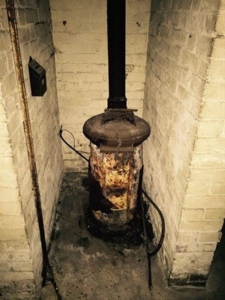 Interestingly, the 1939 Register suggests over 140 adults were living at St Leonard’s Court at the time, meaning substantially less beds were available than the number of residents. In an interview with a former tenant, it appears that the bunks were available to rent for the year at the cost of £7 – the same price as an Anderson shelter. During the interview he also revealed how noisy it would have been in the shelter, as neighbours sat chatting throughout the night; it was not possible to spend consecutive nights there, especially when working the next day, and so he resorted to sleeping in the hall of his flat with his family during some raids.

Research into the architect, Philip A W Roffey, has shown that he was responsible for a similar block of flats – Deanhill Court – close to St Leonard’s. Additionally, the developer for St Leonard’s appears to have been Mr F. G. Fox, a local resident with offices in Paddington, who was responsible for numerous interwar residential projects in the area.

The air raid shelter was successfully recommended for Grade II listing on 23rd July 2009. For complex reasons that are currently making maintenance difficult, the shelter is also on Historic England’s At Risk” register. Habitats & Heritage is involved in its conservation as an educational resource for schools and the community. Along with Mortlake with East Sheen Society we are working towards the conservation of the building as testimony to the way in which people’s lives were affected by the threat of aerial attack in the Second World War.

The air raid shelter is opened to the public as part of the Open House London event. If you miss out you can also explore the shelter virtually through a 360 tour created by Cyclopes TV (please note that this takes you to an external site. We have no responsibility for the content of the site).