Just across the road from St Mary Magdalene Church in central Richmond, a narrow path heads up the Hill between the Vestry House and the Travelodge Hotel. After about 30 yards it opens out to an old cemetery, which was transformed in 1964 into a lightly wooded wild garden. It is secluded and quiet - one of the lesser known treasures of Richmond. Find out more about the heritage and habitats this hidden gem contains.

Just across the road from St Mary Magdalene Church in central Richmond, a narrow path (the Vineyard Passage) heads up the Hill between the Vestry House and the Travelodge Hotel. After about 30 yards it opens out to an old cemetery, which was transformed 50 years ago into a lightly wooded wild garden. It is secluded and quiet – one of the lesser-known treasures of Richmond. 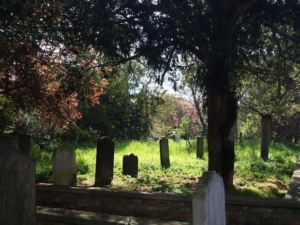 In the late 1700s, the churchyard of St Mary Magdalene was getting full. There was space on the Hill; it was then largely open ground, owned in strips and run as market gardens. The Church Trust already owned land there and more land was bought from a Mr. Edward Collins for £700. The new Burial Ground was consecrated in 1791, behind a new Vestry House (subsequently replaced by the present building) fronting Paradise Road.

By 1874, the Burial Ground was full and closed for further burials. After lying undisturbed for 90 years, it was transformed into a woodland garden. Many of the gravestones in the upper part were laid flat or moved down to the lower part, and there was a comprehensive planting of ornamental trees and shrubs in a subtle and open design. Paths were widened and paved properly, and some benches installed, to create a green oasis much as you see today.

While Richmond Council carries out routine maintenance work, the Vineyard Passage Burial Ground Group has taken a lead role in the care of the Burial Ground. Over the years, we have raised (and spent) some £40,000 in restoring decayed and broken monuments, repairing listed iron railings, improving paths and planting new and replacement trees and shrubs. We have recently created a new area of wild British plants for summer flowering.

Information boards for the passing public have been installed, showing the layout of the grounds and where the main trees and graves can be seen. We erected a noticeboard in the Passage to display brief biographies of the more interesting people buried here – including those seeking fame or fortune in the former British Empire, French aristocrats fleeing their Revolution of 1789, and people who have made their mark in other ways – and notes on the birds  to be seen here over the seasons. 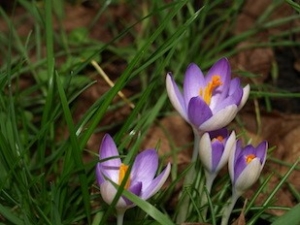 This woodland garden changes at different times of the year. In early spring, snowdrops, crocus and daffodils flower in the open spaces between the trees.

Some of the trees – cherries from Japan, native crab apple, laburnums and lilac, follow them. Then in May the space below the tree canopy is filled with the frothy white of Queen Anne’s Lace, touched with blue from bluebells and alkanet.

The Burial Ground moves into its summer tranquillity from May, when the main flowering is over. It becomes a green oasis of quiet, only yards from the bustle of central Richmond. There is still some colour here and there – a few fuchsias, some roses, a patch of native wild flowers at the top.

With autumn comes the wild fruit that the birds like to feed on – crab apples, cherries, rose hips and berries on elder, rowan, cotoneaster, hawthorn and ivy. And there are even flowers through the winter on some trees and shrubs, a few scented on the warmer days. 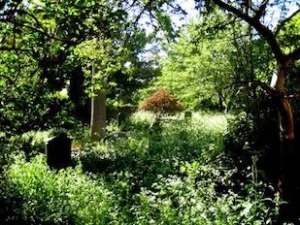 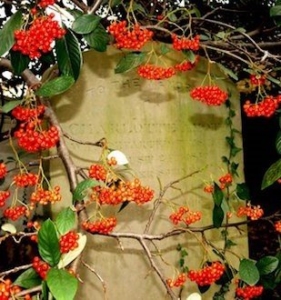 Birds, insects and squirrels love this area as it provides food, shelter and safe places to hide, so it is something of a nature reserve as well. In spring, the birds are wearing their breeding plumage to attract a mate and are busy building nests. As their families fledge, the garden is filled with activity. Later, the birds keep a low profile, as they begin the tiring process of moulting feathers and growing new. They tend to keep hidden among the foliage.

There are also occasional visitors in autumn, particularly redwings, who come from Scandinavia to feed on the berries and stay for the winter.

Vineyard Passage Burial Ground Group meet on the first Saturday each month at 10.30am in the Burial Ground to do litter-picks and gardening maintenance; like-minded visitors are welcome to join us!