Sir Richard Francis Burton KCMG FRGS (1821 – 1890) was a 19th century explorer, soldier, author and linguist. A true polymath who gained a reputation for speaking over twenty languages and  cited as the translator of the Arabian Nights and the Kama Sutra. His achievements in exploration and geography are equally noteworthy, exploring Asia, Africa and the Americas.

Having been expelled from Trinity College, Oxford, he enlisted with the East India Company, where he mastered Gujrati, Punjabi and Marathi, as well as Arabic and Persian. He took to wearing Muslim dress and adopting the mannerisms of his teachers. Indeed, his assimilation was so complete that he would pass as an Iranian traveller using the name of Mirza Abdullah.

It is important to say, however, that, as a Victorian explorer in the age of Empire, he also held some views that most of us today would find unethical.

In 1851, under the auspices of the Royal Geographical Society, Burton completed the Hajj, the annual pilgrimage of Muslims to Mecca and Medina, disguised as a sheikh. Having made sketches and extensive notes throughout his journey, his subsequent publication on the expedition became hugely popular, and made him a household name.

Buoyed by his success and with an appetite for adventure, his next expedition was to Harar, in modern day Ethiopia, and Berbera in Somalia, where, with his extensive language skills, learnt about the ‘inland sea’ spoken about by the local traders. Burton believed that this might be the source of the Nile, which had eluded generations of travellers and explorers. 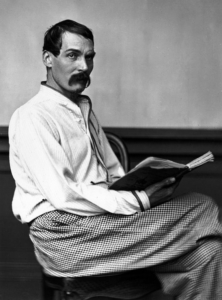 With further support from the RGS, Burton set off from the Zanzibar coast with John Hanning Speke, who had joined him on his expedition to Harar and Berbera, and a retinue of 132 porters. It was a torturous three-year journey and both Burton and Speke fell dangerously ill. However they made it to Lake Tanganyika – the largest of the African Great Lakes – the first westerners to do so. En route, they had been made aware of another lake, and with Burton too ill to continue, Speke took a small party north. He came across the southern shore of a great expanse of water that he identified as the source of the Nile and named Lake Victoria, after the Queen. However, Burton disagreed with Speke’s conclusion and on return to the UK the debate escalated into a public and very personal argument that played out in newspapers and academic journals. Despite both being awarded the RGS Gold Medal for their achievements, the disagreement would go onto haunt Burton and mar his reputation. In 1864 a debate was organised between the two explorers in Bath. But it never went ahead – Speke was killed in a hunting accident on his uncle’s nearby estate the afternoon before the debate. Rumours quickly circulated that Burton was to blame, which, although false, followed him throughout his subsequent career as a diplomat. 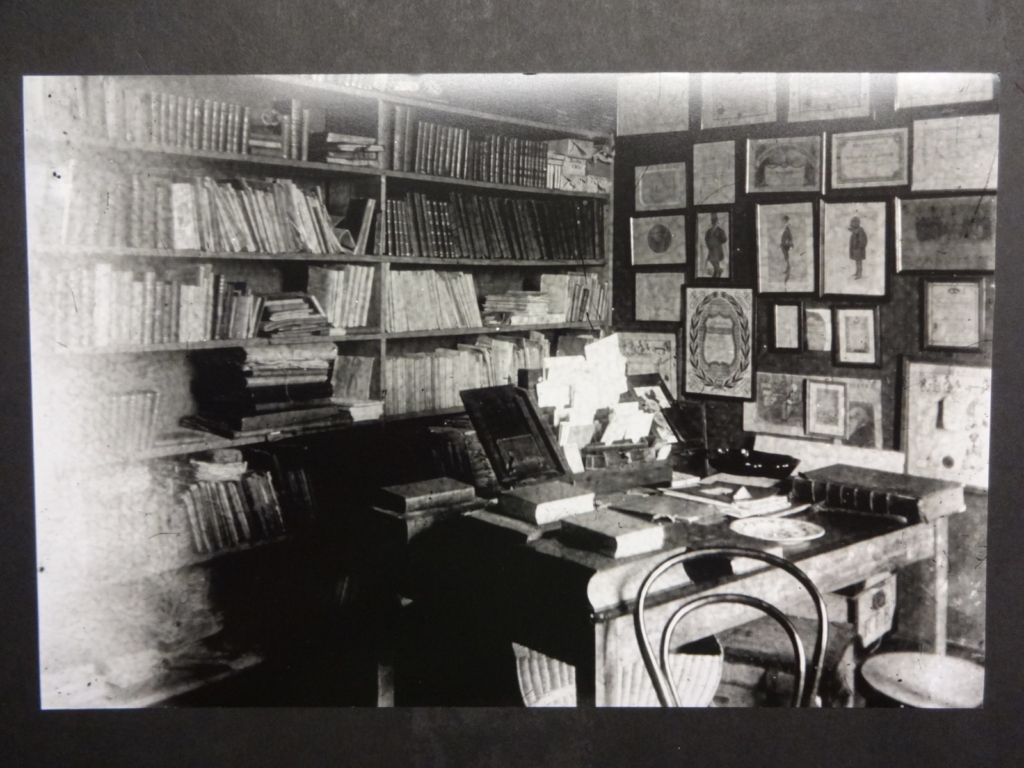 Burton’s extraordinary linguistic abilities led him to become proficient in up to twenty-nine languages including Latin, French, Hindi, Arabic, Italian and Greek. He reputedly spoke Latin from the age of three and Greek at four.

His linguistic talents led him to publish close to thirty volumes of translated texts including an unexpurgated edition of the Arabian Nights, The Perfumed Garden and the Kama Sutra into English.

His favourite posting as a Consul was to Damascus, which is recorded as being one of the happiest periods of his life. He and Isabel, whom he’d married several years earlier and was in every way his equal, would often make trips into the desert living alongside the Bedouin. Isabel had a tent especially designed and made for these expeditions, which is believed to have been the model for his mausoleum in Mortlake.

Sir Richard Burton died of a heart attack in Trieste, where he’d been Consul for almost twenty years, on 20th October 1890. His body was transported back to Britain, and at the insistence of Isabel, who was a devout Catholic, was buried in the cemetery of St Mary Magdalen’s Roman Catholic Church in Mortlake. Yet, the mausoleum skilfully represents Burton’s lifelong love affair with the Middle East and Eastern philosophy. 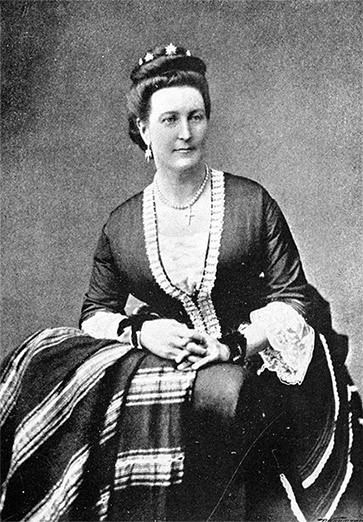 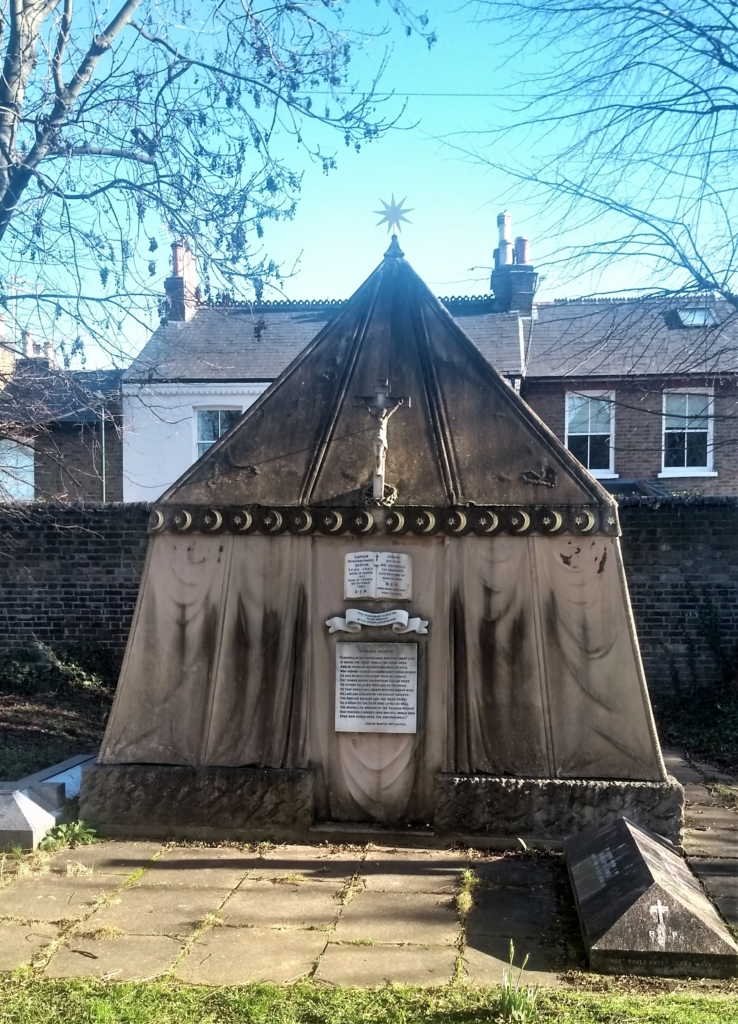 Shaped like a tent the couple had designed for expeditions into the Syrian  desert, the cloth has been beautifully carved from sandstone to look like it ripples in the breeze. A scalloped pelmet that runs around the building is decorated with the reversed Islamic star-and-crescent motif embossed with gold. At the very top of the tent is a gold leaf coated Star of Bethlehem. Inside, are a collection of lanterns from Syria. Camel bells have been strung from the ceiling and would have jingled when the door opened.

Burton is recorded as having said to Isabel, ‘I should like us both to be in a tent, side by side’ and so it is fitting that the mausoleum holds them both – the ornately carved and gilded coffin belongs to Sir Richard Burton, and the plainer mahogany one belongs to Isabel.

With his bicentenary in March 2021, Habitats & Heritage is commemorating Burton’s many achievements. Funds are being raised to carry out essential repairs to the mausoleum so that it can continue to inspire future generations of explorers. Please follow the link at the bottom of this page to donate to the project.

Habitats & Heritage are raising funds for the conservation of Sir Richard and Lady Isabel Burton’s mausoleum at St Mary Magdalen’s Roman Catholic Church, Mortlake – a fascinating structure designed to resemble the tent that the Burtons had made for their travels across the desert in Syria.

We are working to get permission to reopen the mausoleum by reinstating the door after it was sealed from the public almost fifty years ago. The project further intends to repair the deteriorating stonework and to conserve it by replacing the lime-wash finish.