Support our work to conserve the mausoleum of Sir Richard Burton, the famous Victorian explorer, linguist and author.

Habitats & Heritage are raising funds for the conservation of Sir Richard and Lady Isabel Burton’s mausoleum at St Mary Magdalen’s Roman Catholic Church, Mortlake – a fascinating structure designed to resemble the tent that the Burtons had made for their travels across the desert in Syria.

Sir Richard Burton (1821-1890) was a famed Victorian explorer, author and linguist, whose accomplishments include leading an expedition to find the source of the River Nile and mastering over twenty languages, from Marathi to Arabic! Burton is also credited for translating The Arabian Nights, The Perfumed Garden and the Kama Sutra into English.

To coincide with the bicentenary of his birth in March 2021, we are working to get permission to reopen the mausoleum by reinstating the door after it was sealed from the public almost fifty years ago. The project further intends to repair the deteriorating stonework and to conserve it by replacing the lime-wash finish.

Follow this link to read more about Sir Richard Burton 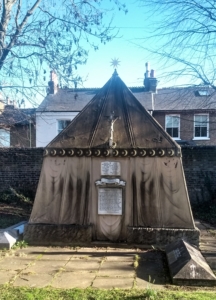 “This fascinating man deserves to be remembered, if only to illustrate how rich and full a life can be when lived without boundaries”

Inside is a collection of lamps from Syria. Camel bells have been strung from the ceiling and would have jangled when the door was opened. The system utilised an early battery pack and circuitry which could one day be made to operate again.

Burton was said to tell Isabel, “I should like us both to be in a tent, side by side”.

“the mausoleum where Sir Richard and Lady Isabel Burton lie entombed is a fitting tribute, not only to the heritage of the famous explorer and his devoted wife, but also to the faith she had in their future afterlife together. The famous Bedouin tent-shape reminds me of another one-time resident of Damascus, St Paul. Not only was St Paul a tent-maker by trade, he likened our bodies to the impermanent, perishable nature of a tent, knowing that the Heavenly Father calls each one of us to the permanent, ‘imperishable’ nature of life eternal. Just as Lady Isabel liked to hear the camel bells tell out as she entered her husband’s tomb before she came to lie there herself, it is not a camel bell that will toll, but ‘in a moment, in the twinkling of an eye, … the last trumpet. For the trumpet will sound, and the dead will be raising imperishable, and we will be changed.”

We want to make sure that Sir Richard Burton will continue to inspire curiosity about the world around us and we need your help. Please donate to our appeal to ensure that the mausoleum of one of Britain’s greatest explorers continues to ‘illustrate how rich and full a life can be when lived without boundaries’.

Learn more about Sir Richard Burton and our project to celebrate his many achievements.

All efforts will be made to restore the mausoleum. However, if for ever reason this is not possible, the charity reserves the right to use donations for other charitable purposes unless stated by the donor.

I live in East Sheen but just the other side of the railway line to the church and want to support conservation of an interesting monument to an extraordinary Victorian explorer.

A very worthy cause. I enjoy bringing visitors to view the tomb and to learn a little about Burton, the man and his achievements.

I lived in North Worple Way in my early days and used to walk past St Mary Magdalen every day going to school. Many years ago, I read Alan Moorehead's book on the search for the source of the Nile and always wanted to visit the mausoleum but did not realise that you could. I will certainly do so next time I'm in the area.

I lived in North Worple Way for the first eighteen years of my life and used to walk past St. Mary Magdalen every day going to school. Years ago, I read Alan Moorehead's book on the search for the source of the Nile and, as a result, have always wanted to visit the mausoleum but did not realise that you could. I will certainly do so the next time I am in the area. In the meantime, I hope my contribution takes you over the line in your fundraising.

Through the windows of the front bedroom of our first married house in Worple Street we could look down on the mausoleum.

A fascinating man and a unique mausoleum.

As a local resident I have loved taking visitors to see this monument over many years and would love to see it well restored.

A fascinating character and true explorer whose tomb should be recognised and supported by the local community.