Capturing photographs in our modern digital age has never been easier. Every new generation of mobile phone contains a superior optical sensor and lens than the previous, resulting with most people now carrying a camera, darkroom and photo album in their pocket! Not only can these images be captured with the utmost simplicity, they can be taken in full technicolour clarity and shared across the globe in a matter of seconds. The convenience and accessibility to record the world around us has never been easier. In the 19th century, however, such a concept would have been the work of science fiction – when the art of photography was one that required bulky equipment and extreme patience. This complexity combined with the expense of Victorian photography, has meant images were often composed with immense care, captured on glass plates and printed on paper which have endured the test of time as a durable archival format for people to admire today. This technology is of course, contemporary with many of the heritage sites we care for at Habitats & Heritage.

On an overcast day in July, our Heritage Projects Manager and Officer, Stephen Fielding and Caitlin Jones, ventured to the Kilmorey Mausoleum in St. Margarets and the Burton Mausoleum in Mortlake armed with an 1890s Thornton Pickard Special Ruby half-plate camera, a wooden tri-pod and two glass plates to capture these sites with the technology used when they were constructed. 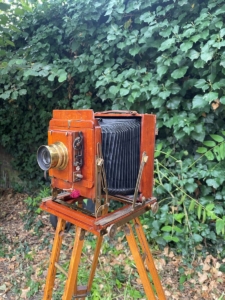 An overcast and calm day was ideal for the photoshoot, as harsh shadows caused by bright sunshine would lead to undesirably high contrast photos and a potential loss of detail. A still day was also necessary, as each photo required a 25-second-long exposure due to the extremely low sensitivity of the photographic plates (ISO 2). Any wind would have blurred the plant life and potentially moved the camera, ruining the image. The plates used were based on the type available in the 1880s which were insensitive to red light, relying instead on the blue, ultra-violet end of the spectrum. A light meter was used to gauge the exposure but a blue filter placed over the sensor to account for this. The time of day, year and latitude on Earth also had to be considered when gauging the exposure as the UV levels vary.

Once the exposure was calculated, the light tight cartridge containing the glass plate was loaded into the camera, the dark slide removed and light let into the leather bellowed camera. After this comes the anxious hours, where there is no way of knowing if all the effort of setting up the camera and composing the shot has yielded in a usable photo. Fortunately, in this instance, the images emerged from the development trays flawlessly and can be seen here.

Follow the hyperlinks to to learn more about the Kilmorey and Burton Mausolea. We are happy to host groups visits to the sites which you may arrange with us by emailing: hello@habitatsandheritage.org.uk.