As part of our project Exploring Without Boundaries, we are inviting members of the public to uncover stories of hidden heritage across south and west London, proving that you don’t have to travel far to discover something extraordinary. This June Andrew George explores the history of Kilmorey Mausoleum hidden behind a high wall in St Margarets. 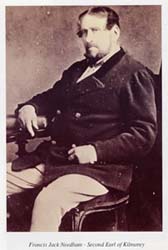 Jack Needham, the 2nd Earl of Kilmorey, was a larger-than-life character whose generosity, energy and moral turpitude cannot fail but impact anyone who reads his story.

There are many sources for ‘Black Jack’s life, including the rather indiscreet memoirs of his lawyer who gives a rather thinly disguised account of the Earl’s way of life and eccentricities.

This is not the place to write his biography; his military service in the Peninsula, his support for innovation in rowing and his practice of the occult[1].  I will concentrate on his time in St Margarets, the two houses he built here, the mausoleum where he and his lover are buried and the tunnel that he used to visit her.

The story starts in 1843. The 2nd Earl is 56 and separated from his wife. He is guardian to the 6 children of his good friend, Sir William Hoste, a renowned Naval hero who died in 1828. The youngest of these children, Priscilla, is 20.

Despite the difference in years, Priscilla and Jack fall in love and elope to the continent. A year later they return to England and settle in Twickenham, where their son, Charles, is born.

Kilmorey loved acquiring and modifying houses, often labouring on them himself, and the 3 of them spent the next few years moving between various homes in the area, before settling in St Margarets. 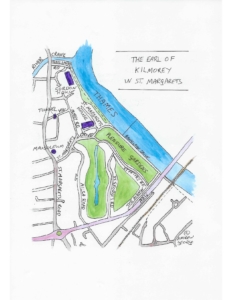 The Earl bought Gordon House in 1851. This sits just south of where the River Crane joins the Thames. It had been lived in by, amongst others, Moses Hart a leading Ashkenazic Jew, and by Augusta FitzClarence an illegitimate daughter of William IV. It had been much extended down the years, boasting a drawing room designed by Robert Adam (his first commission in England).

As was his wont, Kilmorey could not leave the house alone and undertook massive renovations. He is responsible for the Victorian facade that unifies the exterior of what had been previously a rather disjointed building, and added the clock tower. His influence can be seen in the letter ‘K’ displayed prominently on the facade, the stable block as well as the small gatehouse that sits by the foot entrance to Richmond Lock Estate. 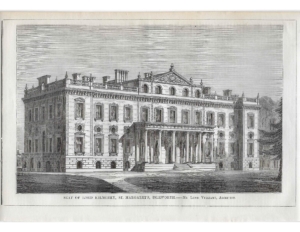 He also bought the adjacent house, St Margarets, a large building by the river. While normally the Earl enjoyed renovation, in this case he demolished the old building and built a totally new one, designed by Lewis Vulliamy. This was an imposing, massive, classical style building placed roughly at right angles to the river. It was completed in 1852, showing that the Victorians were perhaps more efficient developers than we are!

This building was presumably going to be the ultimate home for him, Priscilla and Charles. However, while it was being built Priscilla developed a heart condition and it was clear she would not survive.

The Earl’s building energies were now directed to erecting a mausoleum for Priscilla. This was designed in the Egyptian style by Henry Kendall, and erected in the Brompton Cemetery. In 1854 Priscilla died and was laid to rest in the mausoleum. 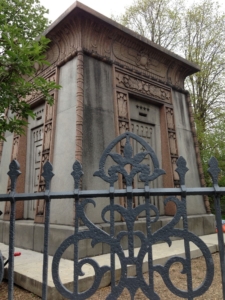 She did not rest for long. The Earl sold St Margarets house and much of the Estate to the Conservative Land Society in 1854. They created the 3 pleasure grounds that form the St Margarets Trust grounds and, in a piece of shameless gerrymandering, sold the plots around them to people who would vote Conservative.

The Earl moved to Sunbury Court, now the Salvation Army conference centre. A few years later he moved to Woburn Park, now the site of St George’s Weybridge, and apparently wanted Priscilla nearby he moved her mausoleum into his garden.

In 1868, when the tenant in Gordon House (Thomas Haliburton, a judge from Nova Scotia and a hugely popular comic author in North America) died, Kilmorey moved back to Gordon House, bringing Priscilla, and her mausoleum, with him.

He lived another 12 years, dying in 1880 at the age of 93. However, he does appear to have prepared for his death. He had a tunnel built under what is now Kilmorey Road, so that he could be wheeled by his servants on a trolley to the mausoleum. It is said that he would dress in a white shift and lie beside Priscilla’s coffin.

This story seems incredible, though there are also unsubstantiated rumours of Kilmorey building funnels in both Sunbury and Woburn Park.

However, in 1966 the tunnel was discovered, and it seems from accounts that staff working in Gordon House would pull each other through the tunnel in a trolley.

What was the Earl doing? It has been suggested, based on his interest in the occult and some Victorian beliefs about Egyptian gods and reincarnation, that he was trying to recreate the God Ra’s daily journey from darkness to light, from death to life.

So what happened to the buildings?

St Margarets House was never the family building it was designed to be. The Conservative Land Society sold it to the Royal Naval Female School, who educated the daughters of officers. They occupied it until 1941 when it was destroyed by enemy bombing.

Jack’s grandson, the 3rd Earl, lived in Gordon House. In 1895 it was sold to become the Gordon House Industrial Home for Girls, where vagrant or destitute girls were taught a trade such as laundry or cooking. The school closed in 1922 and Gordon House became part of the Royal Naval Female School. After the war it was made into the Maria Grey teacher training college, that was then incorporated into West London Institute of Higher Education, which then was taken over by Brunel University. They sold it for development around 2005. Gordon House now sits on a rather too small patch of land in the Estate, looking slightly unloved and underoccupied. 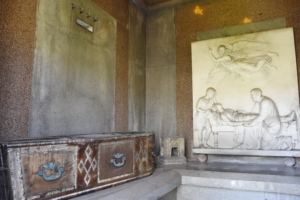 Priscilla and Jack are still in St Margarets, and can be visited in their mausoleum on open days. Their red velvet covered coffins are in need of some repair, but they remain united in death – perhaps waiting for the time that they can make the perilous journey to the god Anubis.

And the tunnel? That must still be there, waiting to be reopened (or appropriated by the inhabitants of Kilmorey Road as a communal wine cellar).

[1] There is a good account in the booklet written by Alan Urwin (Urwin A.C.B. (1997) The Second Earl of Kilmorey and his Mausoleum in St Margarets. Borough of Twickenham Local History Society) and available from Habitats & Heritage. I am also writing a booklet for them which will hopefully be available next year.

Explore: 2 Mansions, 1 Temple and a Tunnel