In 1963, a police box materialised onto people’s television sets. The ‘Tardis’ disguised itself as an everyday object, allowing it to seamlessly blend into the mid-twentieth century aesthetic – ensuring the secrets of time travel within its walls remained a mystery. The Tardis was supposed to blend in wherever it landed but the BBC soon realised it was cheaper for that functionality to remain broken! This of course meant that other than 1950s Britain, it looked rather idiosyncratic.

The Tardis is not the only peculiar structure stuck in one guise to have travelled across space. The Kilmorey Mausoleum in St. Margarets has certainly seen its fair share of space and time travel – residing initially in Brompton Cemetery, then relocating to Woburn Park, Chertsey, before finally settling in St. Margarets where it can be admired today – 150 years after it was first constructed and itself resembling the Tardis. 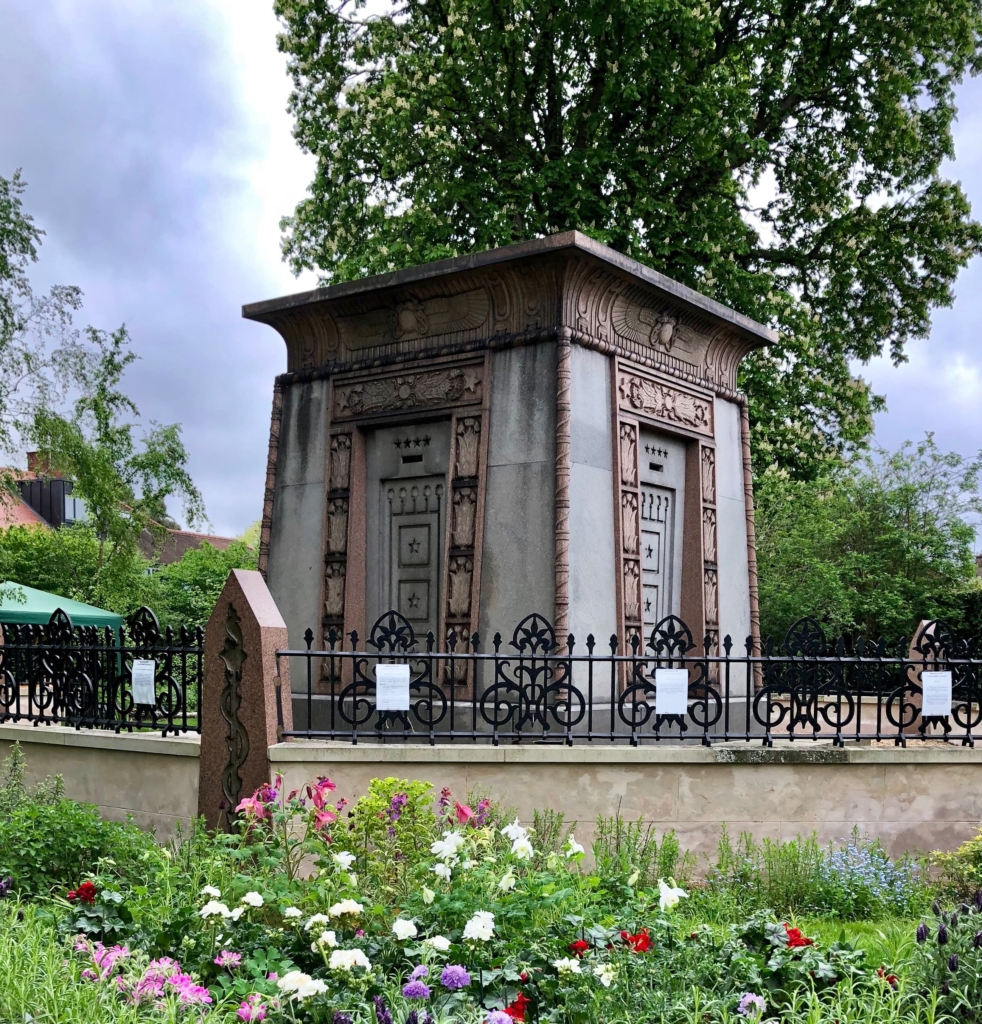 Built as an Neo-Egyptian temple – Kilmorey’s mausoleum is a popular curiosity in the local area, juxtaposing the generic mix of Edwardian and 1930s suburban dwellings. The mausoleum has not always boasted an individualistic style amongst its surroundings and did once blend seamlessly in vogue, only to find itself disassembled and re-erected on an alien landscape to never assimilate again. A trip to Brompton Cemetery in Chelsea, one of London’s ‘Magnificent Seven’ burial grounds, can perhaps provide a clue to why it was stylised in this way and reveal a Victorian world fascinated with the occult and Egyptology. 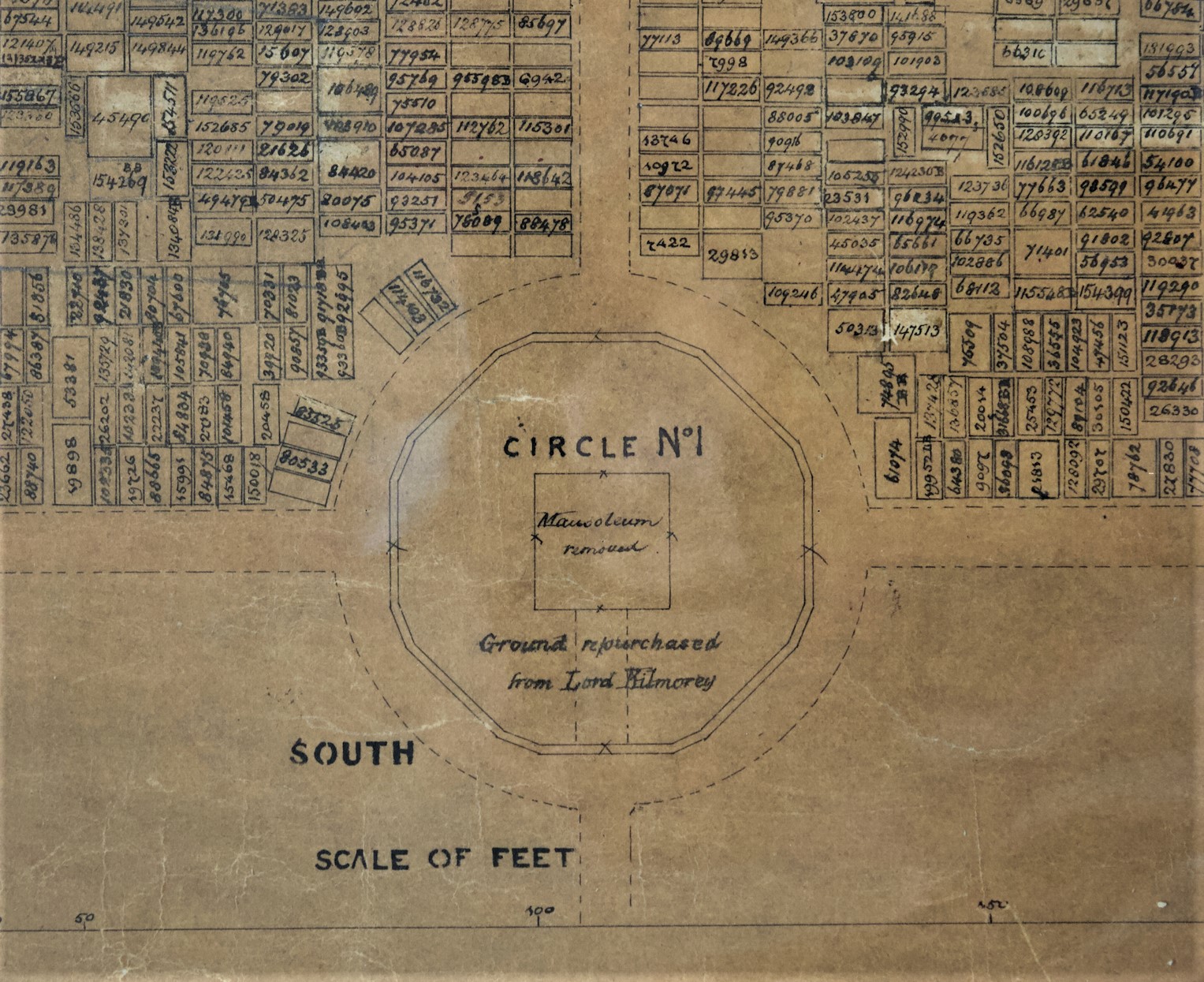 Within the National Archives at Kew are the splendid colour drawings of the £30,000 mausoleum created by the architect Henry Edward Kendall in 1853. Amongst his drawings are the plans of Brompton which show that the mausoleum once resided in ‘Circle No.1’ at the northern end of the cemetery – one of four matching circular plots each surrounded by four paths leading to different parts of the cemetery. Earl Kilmorey purchased Circle No.1 in 1854 for a princely sum of £1030 16s 9d (£116,773 in today’s money!). Here the mausoleum was sited upon the approval of Lord Palmerston and with it the body of the Earl’s mistress Priscilla Hoste until 1863 when it was then relocated to Woburn Park at the expense of £700. The Earl would later move it again in 1868 to its present location costing a further £400 – all the time remaining in the pretence of an Egyptian temple. It would be in the grounds of Gordon House that the Earl would join Priscilla upon his own committal, twelve years later.

Circle No.1 as it is today. This view would have faced the entrance to Kilmorey’s Mausoleum.

Visiting Brompton Cemetery today, Circle No.1 now hosts around seventy-five separate graves set in long grass but if one stands at the point where the mausoleum entrance once stood and looks away, another mausoleum with an uncanny resemblance in Circle No.3 is worth noting. This mausoleum is the resting place of Hannah Courtoy, a once wealthy heiress with a fascination in Egyptology. Her mausoleum is not only visually similar but is contemporary. Records show that when Hannah died, she was placed within Brompton’s catacombs before being relocated into the mausoleum upon its completion in March 1852. Perhaps Earl Kilmorey had seen this structure whilst selecting his plot and been inspired by its design? The neo-Egyptian architectural style which they both exhibit, was made incredibly popular during the early 19th century after Napoleon invaded Egypt – an act that introduced ordinary Europeans to the ruins of ancient Egypt for the first time and subsequently influenced the design of buildings across the UK including other Egyptian style tombs dotted about Brompton. 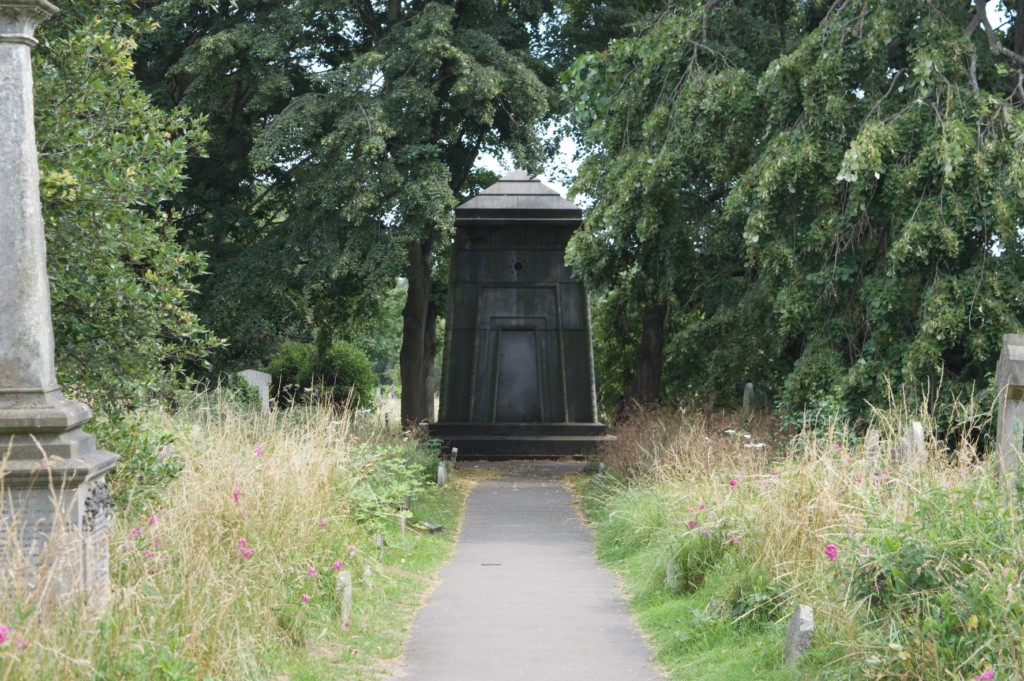 The Hannah Courtoy Mausoleum in Brompton Cemetery’s Circle No.3.

Legend surrounds the mysterious Courtoy mausoleum which has reputedly remained shut for 120 years due to the key being missing. Rumours suggest that it contains a time machine or a means of teleporting between the network of Egyptian style mausolea in Brompton and around London. Could Earl Kilmorey’s mausoleum have featured in this Victorian teleportation network? Perhaps allowing the inner-city gentry access to the Ailsa Tavern and its surrounding countryside? Either way, the architectural resemblance is uncanny. 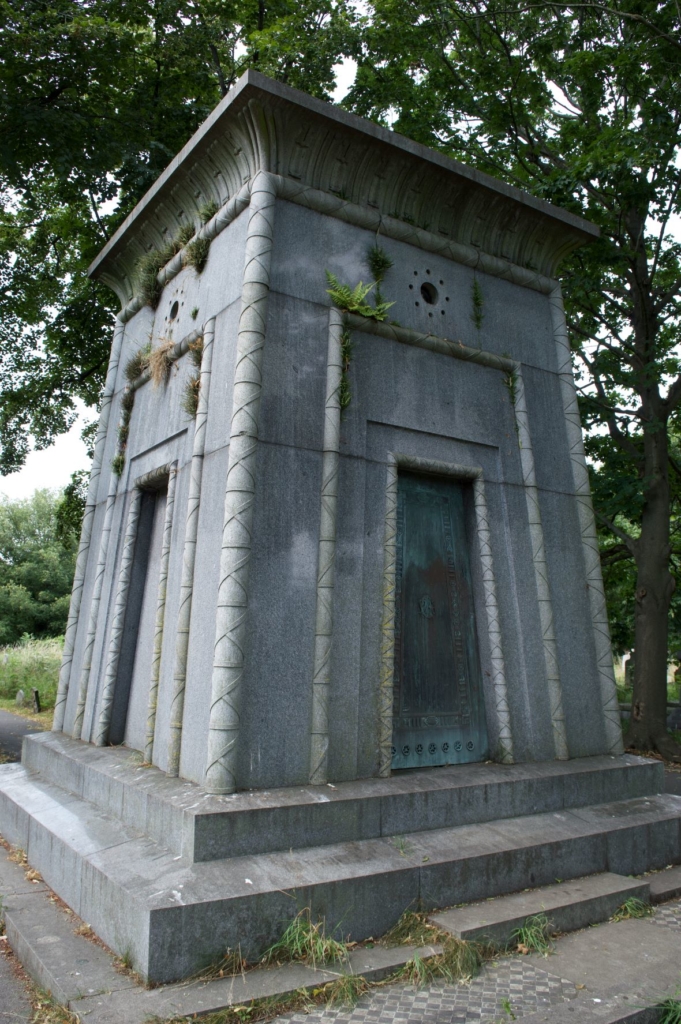 Further fuelling the air of mystery – adjacent to the Courtoy tomb is the grave to Egyptologist Joseph Bonomi the younger, a man famed for arranging the British Museum’s Egyptian exhibits, the Egyptian Court at the Crystal Palace and for becoming the curator of the Sir John Soane’s museum.  The architect of Courtoy’s tomb is unknown as are the whereabouts of the plans. This in itself is curious as no structure of such magnitude was permitted to be built at Brompton without such documentation. A Reuters article from 1998 written by Helen Smith claims it to be the only mausoleum in the cemetery to which no records can be found. Some believe Bonomi was associated with Courtoy and subsequently involved with its design, hence the close proximity of his grave which features Anubis, the Egyptian god of the afterlife straddling a structure remarkably similar to both Kilmorey’s and Courtoy’s tombs. 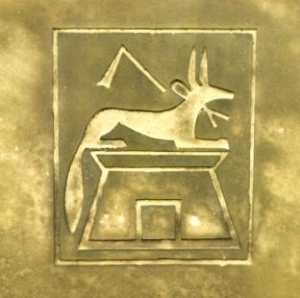 The positioning of the mausolea is also noteworthy, as both once faced one another and both sat on their own islands at crossroads – liminal junctions which are the subject to folklore tales of places where different dimensions meet and gateways between life and the afterlife. Were these mausolea positioned to allow the occupants access to different realms? Of course if you follow these paths to other parts of the cemetery you will spot other intriguing structures smaller but definitely in the same style – reinforcing this fascination with ancient Egypt in the Victorian age. Of course was this design in vogue or where more spiritual forces at work. Why not visit the Earl’s mausoleum at our upcoming open day on the 5th September and see if you too are transported to another part of London or even another dimension!

Please visit the Open House website to reserve your place:

The Kilmorey Mausoleum: Brompton cemetery and the Victorian fascination with Ancient Egypt