What a thrill, to be able to grab my camera and go to see the Graf Zeppelin at the London Air Park, but as both the Graf and the Air Park are long gone I can’t.  Fortunately the iconic airship’s two visits to the Air Park in Hanworth were well recorded so it’s possible to get some impression of what it must have been like.

The Graf was enormous – 776 ft (236.53 m) long and 100 ft (30.48 m) in diameter.  That’s more than three times the length of an Airbus A380 (72.7m long, 24.1m high, wingspan 79.8 m) and nearly twice the length of the field at Twickenham Stadium (125 m long by 70 m wide).  It was in its time the biggest airship in the world.  Most of its volume was taken up by the hydrogen ‘cells’ which gave it lift, but it did carry a crew of forty together with twenty-four passengers and sufficient storage capacity to carry freight and the mail from which generated much of its revenue.  Although its maximum speed was only 80 mph, by the time of the Graf’s first visit to Hanworth on 18 August 1931, it had already made the fastest round the world flight (twenty-one days, five hours, and thirty-one minutes) and done a research trip to the Arctic.

This image from the Britain From Above archives gives some indication of its scale.  The zeppelin, seen in the top right hand corner is parallel to Alfred Road, and the Longford River can be seen curving down beside Danesbury Road before entering the culvert.  The white buildings are hangers, now gone, and the small grey building amid the trees is Hanworth Park House, now almost entirely hidden by trees but then used as the club house for the flying club, and in the bottom left hand corner are airplanes, presumably belonging to the club. 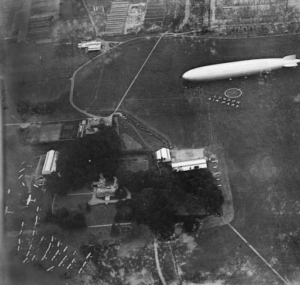 A closer aerial shot from their archive shows the Graf more clearly. Alfred Road is still visible in the background running along to Danesbury Road. Cars can be seen filling Hanworth, Harlington, and Uxbridge Roads as people queued to get to the site. It takes a moment to realize that the small dark spots near the Zeppelin in both pictures are people.   The crowd in Hanworth Park in 1931 was estimated at fifty thousand, and in 1932 at forty thousand. 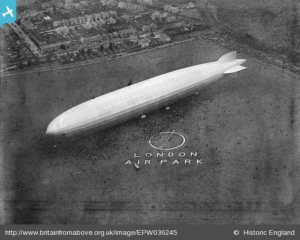 It is hard to imagine a similar phenomenon today, when transport is far from glamorous and we are besieged with images of wondrous things, but a huge silver airship would surely still cause some stir.

The zeppelin needed to be held down, which explains why in many of closeup pictures men can be seen grasping the gondola (the cabin and flight deck area visible below the front of the ship).  On the Graf’s second visit, in July 1932, two hundred of the Middlesex Rover Scouts undertook its handling and mooring.  The Graf’s commander, Dr Eckener, complimented them on their splendid handling and offered three of them a free trip to Germany.  Pathé’s archive includes a brief film from Hanworth Aerodrome titled ‘Graf Zeppelin arrives to take passengers on board for 24 hours’ cruise around Great Britain’ which includes shots of the Scouts at their task.  http://www.britishpathe.com/video/graf-zeppelin  The Pathé archive also includes footage of the 1931 visit, entitled “Hanworth. ‘With No Bombs This Time’. Londoners flock to see – instead of taking cover – the ‘Graf Zeppelin’ here on goodwill visit.” http://www.britishpathe.com/video/with-no-bombs-this-time/query/Hanworth+Aerodrome  (Zeppelins had been involved in air raids during the First World War.)

The Britain From Above image library has a photograph of the Graf at the Air Park taken from some distance away, so it appears to be sitting pointlessly in the midst of fields. 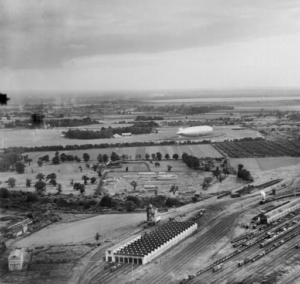 There are many images of the Graf Zeppelin on the internet, including pictures of the passenger cabins, the dining room, and the navigation area  – though be warned that many images are incorrectly identified as the Graf, in particular pictures of the Hindenburg, which famously caught fire and crashed in May 1937, bringing to an end public confidence in the safety of airships.  The Graf was safely retired in June 1937. The area where the Graf landed in what is now Hanworth Park may be variously identified as Feltham, Hanworth, Hanworth Aerodrome, Hanworth Air Park or London Air Park. There are complicated reasons for this which will be explained at another time.

In my research for this blog I have drawn largely on information from Wikipedia and from “Coming In To Land” by Tim Sherwood (A short history of: Hounslow, Hanworth and Heston Aerodromes 1911 – 1946) published by Heritage Publications, Hounslow Cultural and Community Services 1999, a well illustrated and detailed book.

To finish I’ve included an image of the Graf not in the Air Park, but in Brazil, cruising up Gunabara Bay, Rio de Janeiro, which was one of its regular routes.  It looks like an illustration for an old science fiction story.  Wondrous strange.

THE GRAF ZEPPELIN FLYING DOWN TO RIO – NEXT STOP HANWORTH?