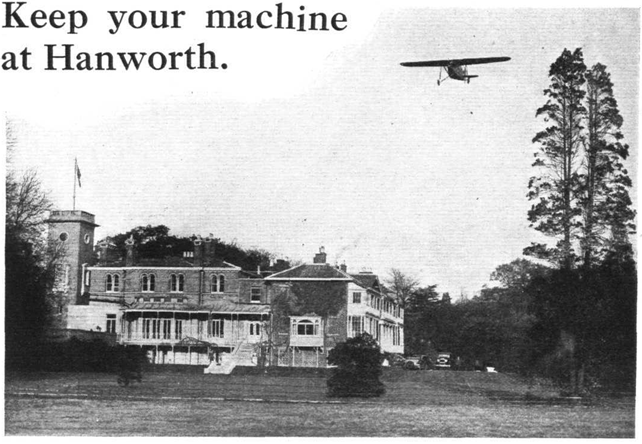 In January 1929 the British Government published a white paper setting out the terms of an agreement with the National Flying Services for the creation of a network of aerodromes, each of which would be an air centre for their locality, offering flight training as well as a flight club.  The headquarters of this network was to be Hanworth and on 31 August the Duchess of Bedford officially opened Hanworth Air Park.  A Pathé newsreel of the event describes it as “London Air Park – first of chain of 71 throughout the country – anticipating the day when we shall all fly – opened by the Duchess of Bedford”.

It seems that ever since man took flight people have imagined a time when everyone would have access to flight, perhaps even their own private flying machines.  After the Wright Brothers’ first powered flight in 1903 the daring adventures of flight’s pioneers took a firm hold on the public imagination and flight as a practical reality seemed closer.  In 1906 the Daily Mail began issuing various air challenges with substantial prize money.  The first, to fly from London to Manchester for a prize of £10,000, wasn’t achieved until 1910, when Louis Paulhan completed the journey in twelve hours (only four hours and twelve minutes of which were spent in the air), but others were achieved more quickly.  Winners included Louis Blériot for his 1909 cross-channel flight, Alcock and Brown for their 1919 transatlantic flight, Amy Johnson for her 1930 solo flight to Australia, and Robert Kronfeld for his 1931 glide to France and back over the Channel.  The Daily Mail’s large circulation would have kept these challenges firmly in the public eye.  Other challenges were being met elsewhere, and in May 1927 Charles Lindbergh achieved almost unimaginable international celebrity with his non-stop solo flight from New York to Paris.  In August that year the silent film ‘Wings’ was released.  Starring Clara Bow in a tale about World War 1 pilots, and featuring genuine in flight footage of recreated World War 1 episodes, the film was awarded the first ever Oscar for Best Film in 1929.

The aspiration of the National Flying Services scheme was for every town of any reasonable importance to be accessible by air, and to have flying grounds all over the country within fifteen minutes’ flying time of each other (and this at a time when air speeds were very much slower than today).

By the time the Duchess of Bedford opened the London Air Park there were already a number of private air clubs, and the Royal Aero Club had been issuing Aviator’s Certificates since 1910.  Flying, however, was still very much a sport for the rich.  While the idea of the national chain of Air Parks seems to have an element of widening of access to flight, the necessary expense would restrict its take-up.

The Hanworth flying club certainly brought glamour to the Park.  In January 1930 FLIGHT magazine reported that due to the expanding membership “means for extending the accommodation of the club house are already being investigated. Music is provided every Saturday and Sunday afternoon for those who take tea in the ball room, and the excellent dancing floor is made good use of. Dinner dances are being held every alternate Friday, with a special one on the occasions of certain matches at Twickenham.” *   The club was well known for its garden parties and for visits by the rich and famous.  The Duchess of Bedford was herself a well known flyer with her own private aerodrome and personal pilot.  She took up flying in her sixties, and maintained that it helped with her tinnitus. Shortly before opening the Air Park she had been on a record breaking round flight to Karachi (a mere eight days!).  The Duchess took the controls for part of that journey, and made her first solo flight on 8 April 1930.  A frequent guest at Hanworth, the Duchess participated in other record breaking flights before being lost without trace during a solo flight in 1937.

On 5 July 1930 the King’s Cup circular air race set off from Hanworth and was won by Miss Winifred Brown.  FLIGHT magazine commented on the feeling of luxury of the Hanworth club, adding “Air racing will really come into its own when the public goes to Hanworth as eagerly as it now goes to Henley”.**  It was held to be a good result that of the eighty-eight planes that started sixty-one completed the course.  One competitor nearing the finish ran out of fuel within sight of Hanworth Air Field and had to fill up at a local garage! 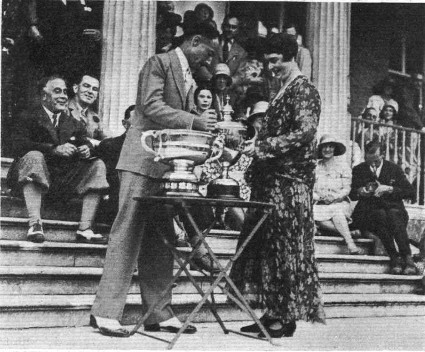 During the 1930s, despite financial difficulties, relaunches, and changes of name and ownership, Hanworth continued to maintain an aura of glamour.  1931 was a particularly glittering year with visitors including members of the Japanese royal family, who watched an autogyro flight, Louis Blériot, who arrived at the June Garden Party in ‘Hannibal’, the world’s largest airliner (the so-called “Winged Cunarder”), C W A Scott, who brought to the same garden party the Gypsy Moth in which he’d just flown to Australia and back in record time, King Alfonso of Spain and Lord Stonehaven who visited later that month for a display of gliding, one of the glider pilots being Robert Kronfeld, who two days later took off from Hanworth on the first glide over London, and in December Bert Hinkler landed at Hanworth on completion of the first solo crossing of the South Atlantic in a light aircraft, a DH Puss Moth. He later gave a talk in which he related that for the first seven hundred miles out from South America he had had to fly at approximately five feet above the water because of the strength of the Trade Winds.  The most spectacular visitor of 1931 was the Graf Zeppelin, which arrived in August.  Her visit was so successful she came back again the following year. 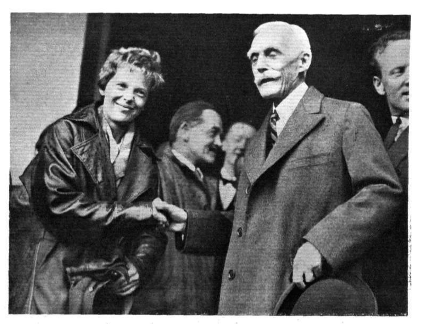 Amelia Earhart is greeted by Mr Mellon, the American Ambassador, and Col. the Master of Sempill (right) at Hanworth  (FLIGHT magazine 27 May 1932. Image courtesy  FlightGlobal: part of RBI, reedbusiness.com)

After completing her 1932 solo flight from Newfoundland to Ireland Amelia Earhart visited Hanworth, landing in driving rain – an event commemorated by Walter Sickert in his painting ‘Miss Earhart’s Arrival’, now in the Tate.  .  Charles Lindbergh visited in April 1936 and at the June Garden Party later that year Amy Johnson christened the first purpose built air ambulance ‘Florence Nightingale’.  Record international flights set off to Japan and Brazil after the christening of the planes by the wives of the respective ambassadors, and over the years numerous different types of aircraft were exhibited and demonstrated.  The public were admitted to some events, and were able to go on ‘joy rides’ as well as watch flying demonstrations and, in some instances, inspect the interiors of the craft.

Unfortunately the shine wore off.  Residents had long complained about noise and expressed concern about the danger, and in 1937 one of the competitors in the Isle of Man Air Race, which set off from Hanworth, crashed into a house in the Hounslow Road, killing the pilot, co-pilot, and one of the occupants of the house.   With the coming of the Second World War the heyday of the club was over.

Looking at Hanworth Park today one would not think it had ever had a place in Britain’s flying history.  Almost all trace of the airfields have vanished, and the former club house stands empty, barely visible within its island of trees.   The peace and open space of the current Hanworth park is of course far preferable, but perhaps on a fine summer’s day one might imagine the music, the garden parties, and those extraordinary men and women in their wonderful flying machines.

I have only recently begun to learn about Hanworth Park’s aviation history, and this blog is of necessity a skate over the surface of its complex past.  The on-line Pathé News archives include good footage of some of the events at Hanworth, including Bert Hinkler’s arrival and talk, and detailed information about Hanworth and all things aeronautical can be found in the FLIGHT magazine archive, which is available on-line (www.flightglobal.com/pdfarchive/ ).  The Pathé archive includes footage of the remarkable ‘Hannibal’ in its 1930 film ‘Giant British Airliner’, and their 1932 film ‘In The Van’ shows ‘The Flying Scotsman’ steam train “rushing north at a mile a minute” while onboard radio engineers try out a two way conversation with the crew of ‘Hannibal’s sister plane, ‘Heracles’, which is flying nearby.  Fascinating footage of both machines, and, of course, great vintage accents.