If you had 3,500 acres what would you do with it? How about as little as possible?

That is exactly what Knepp Wildland Project in West Sussex has done. The estate was, until 2001, run as commercial farmland. But since then has been devoted to a rewilding project. This project differs from conventional conservation works by focusing on the ecosystem as a whole instead of specific species or habitats.  Using grazers to drive habitat creation the project has seen impressive increases in biodiversity.

We were lucky enough to visit the estate with a group from the Richmond Biodiversity Partnership to find out a little more about the project. We had three hours exploring the southern part of the estate on foot, led by two fantastic guides. The site has seen an increase in populations of common species and extremely rare species such as nightingales, peregrine falcons and purple emperor butterflies, normally associated with woodland habitats, are now breeding at the site.

The grazers are selected to best match the species that would have historically been present in the area. They each fill their own niche, from the grazing Old English Longhorn cattle and the three species of deer with different browsing techniques to the Tamwoth pigs filling the role of wild boar turning soil promoting natural growth.

Their different grazing techniques and methods of physical disturbance (from trampling and puddling to rootling, rubbing, snapping branches and de-barking trees) together with their ability to transfer nutrients and disperse seeds over wide areas; has stimulated the creation and a complex mosaic of habitats.

The rewilding project at Knepp estate has seen rapid response from wildlife with populations rocketing. Including all five UK species of owls and thirteen species of bats are now commonly found at the site. Rewilding at this scale seems so far to be a great success.

But not all of us are lucky enough to have 3,500 acres to play with. So how do we use these ideas and processes a little closer to home? 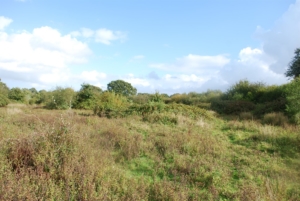 We can all start with ourselves, change the way we think of gardens and parks, move away from the ‘tidy’ gardens and manicured parks being the norm, to allow nature to be ‘wilder’. Think twice before using chemicals that includes ‘just a few’ slug pellets, weed killer on patios or fertiliser to help things grow. As individuals we also have a role to play in the actions of our local authorities.  Voicing opinions to reduce roadside grass cutting and supporting wilder parks can have a huge impact.

We are increasingly aware of the benefits of wildflowers for pollinators and this has seen many of us sowing wildflower seeds which mostly are flowering annuals. Its often better to just stop mowing. This can see the growth of a variety of species which flower just as beautifully and often offer later food and can support caterpillars of butterflies such as meadow browns in the turf. 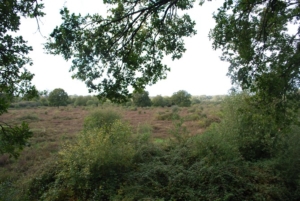 And its not just wildflowers, when we think about creating a ‘wild garden’ or park we plant native species or wild plug plants. Why not take a chance and see what your garden does on its own? It may take a little longer that the instant changes that are seen through planting but often nature responds quickly. Wild nature re also likely to be better suited to the area and you could see better results.  However, most of our gardens won’t see many grazers across them so some lite maintenance may be necessary to ensure the more vigorous species, nettles, bind weed and bramble, don’t swap the space. These species also have their place by supporting hundreds of birds and insects.

Our trip gave us much food for thought, we recommend seeing it for yourself with the estate offering walking routes, guided ‘safaris’, and even camping and glamping. See what they have done and what we can all do to be a bit wilder.