Each month, as part of our project Exploring Without Boundaries, we are inviting members of the public to uncover stories of hidden heritage across south and west London, proving that you don’t have to travel far to discover something extraordinary. This March Simon Wild explores the life of the social reformer Edwin Chadwick, who is buried in Old Mortlake Cemetery. 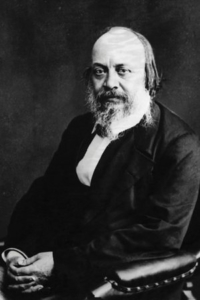 Edwin Chadwick was born in Lancashire in 1800. Aged 10, he was brought to London by his father, who had been appointed the editor of a radical newspaper. Not much is known of Chadwick’s teenage years. It seems he was home-schooled. In his 20s he began to read for the Bar and also to write articles for left-wing journals. He became the deputy editor of a left-wing newspaper called the Examiner. He enrolled at the newly founded UCL (their 250th student) in order to attend lectures on jurisprudence. His journalism brought him to the attention of Jeremy Bentham, the most influential political theorist of the day. Chadwick became Bentham’s research assistant. After Bentham’s death in 1832 Chadwick was appointed to the Royal Commission looking into how the Poor Laws were working. He had a significant impact on framing the commission’s recommendations for the reform of the Poor Laws – recommendations which were adopted by Parliament and became the Poor Law Amendment Act 1834, which is the most significant single piece of social legislation of the 19th century.

He also served on a Royal Commission which looked into the question of child labour in factories. The Commission’s report led to the reduction of the amount of hours children could be required to work in factories. It also led to the creation of a central Factory Inspectorate, which was a significant and lasting change in the way the welfare of factory workers was safeguarded.

The Poor Law Amendment Act 1834 set up a body called the Poor Law Commission to oversee the operation of the new Poor Law. Chadwick was its secretary. In 1838 this Poor Law Commission was asked to investigate the conditions in which ordinary people were living. They asked their secretary, Chadwick, to do the research. Chadwick spent two years touring the most deprived areas of England and Scotland. His report – called “The Sanitary Condition of the Labouring Population of Great Britain” (1842) disclosed such an appalling picture of the living conditions of the poor that the members of the Poor Law Commission refused to sign it. They said Chadwick could sign it as his own if he wanted. He did sign it and its publication caused a sensation in early Victorian Britain and made Chadwick’s name. It led to the first Public Health Act (1848) which created the General Board of Health, of which Chadwick himself was a member. The Board came just in time for it to begin taking steps to combat the cholera epidemic of 1848 by means of street cleaning, waste removal and improved sewage systems.

Some of Chadwick’s opinions were way ahead of his time. For instance, he was against corporal punishment and in favour of more physical exercise for children and free school meals for poor children. 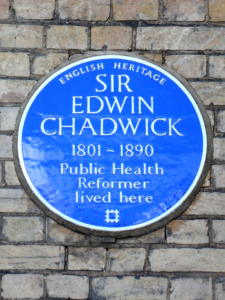 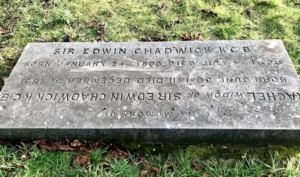 If you would like to submit a story please email Emily Lunn: emily@habitatsandheritage.org.uk