As part of our project Burton: Exploring Without Boundaries, Heritage Project Manager, Emily Lunn, took the opportunity to speak to Eugene Rae, Principle Librarian at the RGS, to learn more about the collection and what they hold on the man whose nickname was ‘Ruffian Dick’.

EL: The RGS collection contains over 2 million items! What does it cover?

ER: The archives contain all the unpublished material collected by the Society since its founding in 1830. It is a treasure trove of material documenting the history of exploration and the development of geography as an academic discipline. It contains correspondence between individuals and organisations with the Society so there are letters from many of the major figures in geography and exploration.

The artefact collection is the smallest component part of the RGS Collections consisting of approximately 1500 items. The artefacts can be divided into three categories. Firstly, scientific instruments, such as Charles Darwin’s pocket sextant carried on the voyage of the Beagle in the 1830s, and David Livingstone’s prismatic compass, carried by him on his final journey, in search of the source of the White Nile (Above). Secondly, the personal effects of explorers such as George Mallory’s right climbing boot, dating from the 1924 Mount Everest expedition and, recovered from his body in 1999 and Ernest Shackleton’s Burberry balaclava helmet worn by him during the British Antarctic Expedition, 1901-04. Thirdly, cultural objects brought back from various parts of the world by explorers and travellers. These include a pair of Inuit boots brought back from the Arctic by Edward Parry after his Northwest Passage expedition of 1823 and a glazed tile from the Porcelain Tower of Nanking, destroyed during the Taiping Rebellion in 1856.

The Library contains a huge range of books and periodicals collected since 1830. It was established with a gift of books from the wealthy gentlemen who founded the Society. The Library has been expanded greatly over the years and we continue to add to it. The geography and exploration of all parts of the world is covered but the collection is particularly strong in areas where the Society has had a particular interest such as the Polar Regions and Africa. Even though the Library was founded in 1830 there are many books dating from much earlier. The oldest monograph is, Alfontii regis castelle illustrissimi celestiu motuu tabule:… At pmo. Ioanis saxoniesis in tabulas alfontii canoes ordinati incipiut faustissime. Tabule astronimice illustrissimi Alfontii regis castelle incipiut fidere foelici [EL: Wow! That is a long title!]. This is a set of astronomical tables created at the behest of Alfonso X, King of Castile and Leon. It was published in Venice in 1483.

The Map Collection forms the largest constituent part of the RGS Collections with over 1,000,000 maps and thousands of atlases. The Collection contains both published and unpublished maps. The published maps cover most of the world. Europe and those parts of the world formerly controlled by the British Empire are particularly well served. The Collection includes Ordnance Survey mapping of the UK at six inch to the mile (later 1:10,000) so that that it is possible to observe the changes that have taken place in the British landscape from the Victorian period up to the 1990s. The mapping of the Survey of India which operated from the early years of the 19th century onwards is another of the highlights.

EL: Wow! That is a very extensive collection. What are some of the highlights?

ER: A highlight from the Artefacts Collection is the consul cap with gold band which Livingstone was wearing when he and Stanley met at Ujiji in 1871 (Below). This cap was made for Livingstone by Starkey’s of Bond Street, and became a key element of his public image, appearing beside him or on his head in a variety of photographs and featuring prominently in the engravings that illustrated his book Missionary Travels, first published in 1857.

In the Library the RGS holds the South Polar Times dating to 1902-03 by Robert Falcon Scott & others. This “in-house magazine” (typed and hand-illustrated) was produced in Antarctica during The British Antarctic Expedition, 1901-04 (Discovery expedition) (Below). It acted as a diversion from the boredom of the enforced captivity of an Antarctic winter. Ernest Shackleton was appointed editor with a mandate to produce a magazine that was both instructive and amusing. In its pages scientific papers appeared alongside poems, humorous stories and acrostic puzzles. Its production was democratic, with the men as well as the officers being invited to contribute to its pages. The ship’s carpenter created a wooden post-box to encourage anonymous donations to the series. The typescript series also includes watercolours, pen & ink diagrams, pencil sketches and caricatures of expedition members produced by, amongst others, Edward Wilson, the doctor of the expedition. This unique set was donated to the Society by Captain Scott.

EL: Sir Richard Burton was a prolific writer and note taker. Can you tell me about some of the items you have in the rgs collection relating to him?

ER: The Royal Geographical Society (with IBG) Collections hold a varied selection of material relating to Richard Burton. In the Library there are his published monographs such as, The lake regions of Central Africa, with notices of the Lunar Mountains and the sources of the White Nile. This is Burton’s very thorough account of the first RGS sponsored expedition to look for the source of the White Nile (1856-59) with John Hanning Speke. It was published in 1860, the year Speke departed for the second RGS sponsored expedition, this time in the company of James Augustus Grant. Burton and Speke had well and truly fallen out by this point and Burton is very scathing of Speke’s contribution to the first expedition.

The Map Collection holds a number of maps both published and manuscript which illustrate the range of expeditions undertaken by Burton. There is, The Route of Richd. F. Burton (Lieut. Bombay Army) from Yambu to El Medinah and Meccah, which was drawn and engraved by E. Weller and published in 1855. This is the journey that made Burton’s name. He travelled to Mecca and Medina in disguise, knowing that discovery could spell death.

EL: The search for the source of the Nile fascinated victorian society, and Burton was only one explorer to lead an expedition to find it. Who were some of the other famous explorers who led expeditions to find the source?

ER: The RGS invited Richard Burton to lead an expedition to investigate the lakes of Central Africa. Burton and John Hanning Speke (Below) set off from Bagamoyo on the 16th June 1857 armed with a map drawn by Erhardt [a missionary who was among the first Europeans to see snow capped Mount Kilimanjaro and Mount Kenya]. The map showed one vast inland sea, which eventually turned out to be Lakes Victoria, Albert and Tanganyika. Burton ‘discovered’ Tanganyika and Speke, Victoria. Burton thought Tanganyika the source and Speke, Victoria.

The RGS then sent Speke and James Augustus Grant to try and settle the question. They returned to Lake Victoria and eventually reached its northern shore where they found a waterfall feeding a river. Speke named the falls the Rippon Falls. The river was the Nile. They did not have time to follow the river to Gondokoro but went overland instead.

At Gondokoro they met Samuel White Baker and his wife Florence, who had also been commissioned to lead an expedition by the RGS. Then in 1864 Samuel White Baker and his wife Florence reached a lake which they named Lake Albert. At the northern shore of Albert they found two rivers one flowing into the lake from the east (coming from Lake Victoria) and one flowing out of the lake northwards. They followed the northwards flowing Nile until they reached a large waterfall, which they named the Murchison Falls (Kabarega Falls). The stretch of Nile between the two lakes they left unexplored. 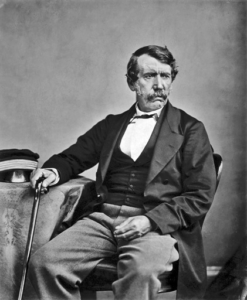 In another attempt to settle the question, David Livingstone (Above) was sent by the RGS to see if he could resolve the issue. He spent six years to the southwest of Lake Tanganyika trying to locate the source of the Lualaba River, which he was convinced was the early stage of the Nile. He tried to follow the river north but was thwarted by the terrain and state of chaos caused by Arab slavers. Livingstone was wrong about the Lualaba, in fact the Lualaba is the beginning of the Congo/Zaire (2,720 miles or 4,380 km long). Lake Tanganyika is actually one of the sources of the Congo and not the Nile.

Verney Lovett Cameron, sponsored by the RGS, set off to find Livingstone [who’d died in 1873 in present day Zambia]. He arrived at Tanganyika and made a thorough survey of the lake. He found 96 in-flowing streams and only one out-flowing, the Lukuga which flows into the Lualaba. He was convinced that the Lualaba was not the Nile but was in fact the Congo but he was unable to follow the Lualaba due to lack of river transport. Instead he went south/south-west reaching the Atlantic at Benguela, in modern day Angola. In so doing he became one of the few Europeans to make an east-west crossing of Africa.

EL: What items in the collection record this exciting period of British exploration? 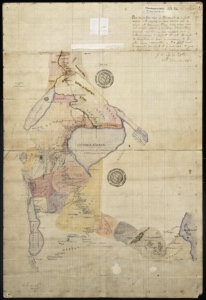 ER: This is a beautiful hand-coloured map made by John Hanning Speke and James Augustus Grant in 1863 and shows their route from Zanzibar to Gondokoro via Lake Victoria. It shows the White Nile issuing from the lake (Above).

EL: Finally, do you have any favourite items out of the 2 million in the collection?

ER: My favourite item in the collection is a Ships’ biscuit left at Port Leopold by Sir James Ross in 1849 and found by Albert Hasting’s Markham in 1873, still in perfect condition (Below). It has been with the Society since and remains in good order. A true tale of survival against the odds.

EL: definitely not something to dunk into your tea! Thanks so much eugene

Find out more about our project Burton: Exploring Without Boundaries and our work to restore the mausoleum

Don’t forget to check out the RGS Collections online.