Each month, as part of our project Exploring Without Boundaries, we are inviting members of the public to uncover stories of hidden heritage across south and west London, proving that you don’t have to travel far to discover something extraordinary. This February Jen Dyer explores a mysterious tower in Mitcham.

As a lover of old buildings and all things heritage, I have seen many a folly in the parkland of country estates. I was not expecting to stumble across one on the banks of the River Wandle whilst taking a detour from my usual lockdown loop.

A folly is an extravagantly ornamental building, usually with a primarily decorative rather than functional purpose. The River Wandle, by contrast, has a history as a very functional river. A tributary to the Thames that runs from Croydon and through Wandsworth it was, during the Victorian era, ‘one of the hardest working rivers in the world, with 90 mills along its 11 mile length”[1]. Today, there are a few charities that promote its interests, one of which created The Wandle Trail walking route: https://wandlevalleypark.co.uk/map/ 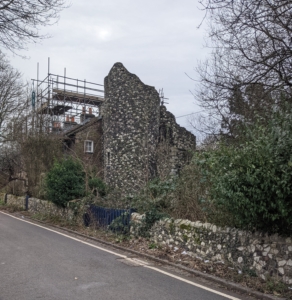 I have spent many an hour on the twists and turns of the trail and it has been full of surprises, between seeing egrets, a kingfisher, and discovering the Phipps Bridge Folly, also called Everett’s Folly (image 1, Jen Dyer). The Folly is a curiously charming building at the end of a small row of workmen’s cottages. When these cottages started to subside into the river c.1870s this flint folly was built in the style of a gothic, ruinated castle tower to act as a support.

It is not clear exactly who built the folly but it is known that Gilliat Hatfield took up ownership of Wandle Villa and the factories in 1867[2], he later left the whole Morden Hall Estate to the National Trust. There is a rumour that the flint used to build the folly came from the old London Bridge, though it is more likely it was built from the old Merton Priory Walls – an Augustinian priory built c. 1114 (image 2, Merton Council). 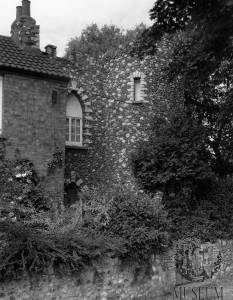 Today, the folly stands empty and unkempt though there are reports that it was lived in c. 1905 – 1910 by a ‘gypsy’ couple who had resided on the common. The Folly consists of two main rooms over two storeys, connected with a spiral staircase, with a wash house and small garden attached. For many reasons, including this one, it is not really a true folly as it has always had a structural function and latterly even a domestic one.

It is a building shrouded in mystery, even featuring in a local ghost story of a spectral figure climbing the spiral stairs by candlelight[3]. I have tried to unearth some of its mystery, finding that it is owned by the National Trust as part of the Morden Hall estate. I reached out to them to ask of its future and was told there are plans to refurbish it, though they were derailed during lockdown.

If you’re looking for a new lockdown walking destination then I recommended the Wandle Trail, and taking a brief wrong turn or two, so the Folly can continue to enchant new bypassers.

If you would like to submit a story please email Emily Lunn: emily@habitatsandheritage.org.uk

Explore: A Folly on the Wandle